In my teen years during the 1960’s, if you put a piece of paper in front of me it was instantly covered by some drawing from my imagination.  The 1960’s were turbulent times.  Race riots were explosive headline news daily across the country.  There was fear and hate I didn’t understand but was fed.

It was the time of school busing and I was to be bused to a junior high school far away with a lot of black teens.  I heard about knives in the schools and being told to carry extra money to pay off bullies

I ended up being sent to a boarding school because I was a truant for a year and left back so my mom sent me away to have the nuns deal with me.  And I would have to go to school.

Actually I ended up doing well with discipline and I had company with a lot of wealthy girls who were problems to their families. We were misfits trapped in a nunnery in Sag Habor Long Island.  But I have to say I did well in school.  I only tried to escape once!

Anyway, back to this post of the racial issues.  I ended up being accepted by the High School of Art & Design in NYC.  My major was fashion illustration.   And I always was doing a doodle or drawing every day.   My mom rescued boxes of my work and that was the tip of the iceberg.
So one day I had my markers and paper and in my imagination I saw two young black girls and it started with a doodle and became this small drawing.  I called it “Sisters”.  It was in my mom’s apartment.

In 2005 I found it and showed it to my friends at work.  The paper was old but the drawing was strong.  One of the secretaries loved it and she offered me an excellent price for it. It spoke to her as a black woman.  It was how I related to African Americans in 1965 as a teenager who despised violence and hate.   I didn’t want to have fear and in a doodle I saw love. 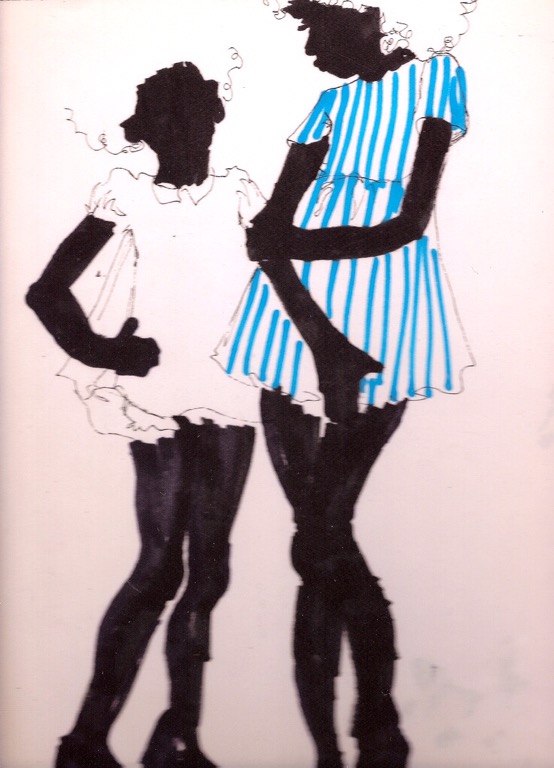